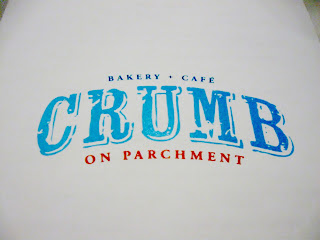 night (May 17th for those of you in the future) was the latest Cobaya dinner and I was lucky enough to get a seat. Like I said up in the subject, our chef was Michelle Bernstein. Frodnesor, in his introduction, said that he was interested in her participating in the Cobaya dinners from the start and approached her back in February and she agreed immediately. The timing, I presume, is due to the opening of her new venue, Crumb on Parchment, a few doors down from Sra. Martinez. It's not listed on her website, but they had menus and a special board up so it must be already open. 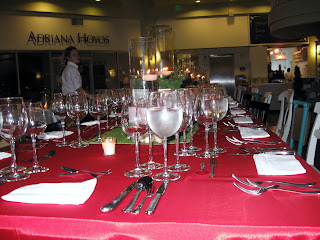 No matter; this dinner bore little resemblance to what I saw on that menu, and Chef Bernstein had pulled staff from her other places for the evening so it wasn't even the same folks preparing it. I had problems with my pen so my notes are sparser than usual, but I do have down here that this menu was intended to be playful and she didn't want to kill us with too many courses (unlike Chef Hales of Sakaya Kitchen who comes to Cobayas with murder in his heart). So, just four savory courses, a palate cleanser and a dessert. I got the wine pairing too so I'll talk about those as I go along.
First 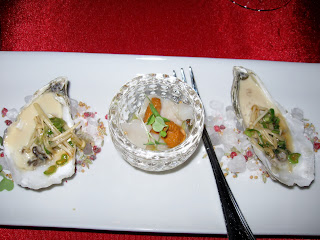 up, an oyster chawanmushi (in a steamed custard) topped with enoki mushrooms and paired with a scallop and uni ceviche. I found the oyster a delicate and nicely balanced little bite. The creaminess of the custard and chew of the mushroom gave it a nice variety of textures as well. The ceviche was also understated, mostly comprised of tender flavorful scallop accented by the rich uni. There was just a touch of citrus in either component which made the wine, Julien Fouet Saumur 2008 whose grassy nose belied a flavor not too far from sucking on a Lemonhead candy, a really nice pairing. I can't imagine that the folks who were drinking whatever bottle they brought with them enjoyed this course as much as I did. I think the guys across from me were drinking a Cotes du Rhone. I know they're serious gourmets and I don't know how they can play wine-pairing-roulette like that. I'd rather drink water.
The 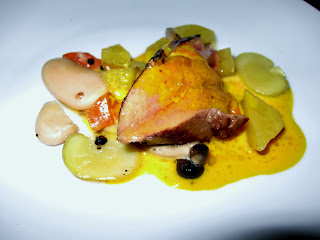 second course was slices of a whole foie gras cooked sou vide then roasted served over fava beans, diced carrot and turnips, I think--spring root vegetables anyway--with a carrot-orange reduction. This dish had something of a hearty meat and potatoes feel to it despite not being quite meat and no potatoes on the plate. All the components were well-prepared and the sauce tied the plate together. The wine, Kiralyudvar Tokaji Sec 2006, was mildly sweet and its fruity roundness cut through the richness easily.
The 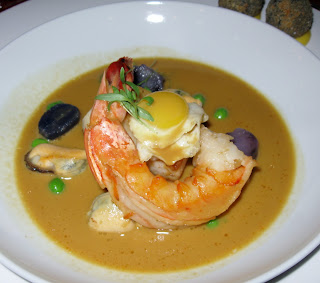 third course was chupe de mariscos, including a prawn cooked sou vide, a piece of fish I believe she said was paiche, clams, mussels, peas and purple potatoes (I could have sworn there were beets in there too but I have been persuaded that I was incorrect) topped with a fried egg and served with squid ink risotto croquetas and aoli (nearly cropped out in the upper right corner of the picture). The rich, flavorful spicy broth was the highlight here along with the crisp-outside creamy-inside croquetas. Nothing wrong with any of the other bits other than maybe the texture on the prawn, but those two components were knockouts. I wish I had been more mindful of the fish but I had forgotten that paiche is such a trendy big deal. A bit of a note problem for the wine for this course; I'm not sure if it was the Mas Sorrer Montant or the Mercy Pinot Noir. I think it was the Mercy. Anyway, it was sharp and tannic and paired nicely with the broth. 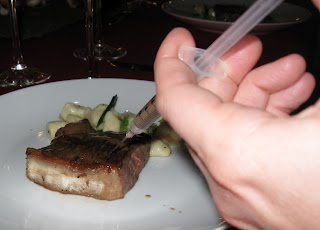 Fourth course was New York steak, very slowly cooked sou vide, with a truffle butter demisauce and ricotta gnocchi with celery leaf, chives buds and lily bulb. We were each given a syringe of sauce and instructed to inject small doses into 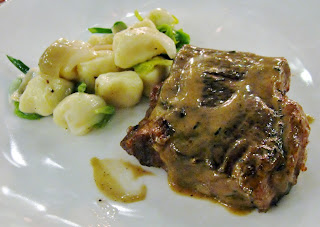 various parts of the steak. Chef Bernstein described this as something she's always wanted to do and as "really cool". It was fun, I'll give her that, but the flavor was lost what with the puddle of the same sauce already on top of the meat. Personally, I thought it could a touch more salt, too. More problematically, I've come to the conclusion that I just don't like the texture of meat cooked sou vide. I like a little chew and various levels of doneness at different depths. It adds interest. Also, maybe it could have been warmer? Good gnocchi, though. I particularly liked the lily bulb with the truffle sauce. If the last wine was the Mercy, that means this was the Mas Sorrer. It was a tart black cherry and rather nice in either case.
Next 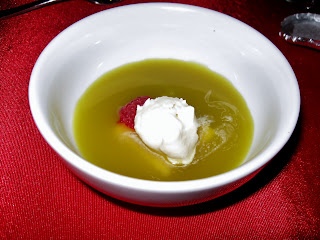 up was the palate cleanser, a calamansi soup with a chunk of pineapple and a small scoop of mint ice cream. The tartness of the soup was tempered by the slight bitterness of the ice cream and the sweet pineapple. 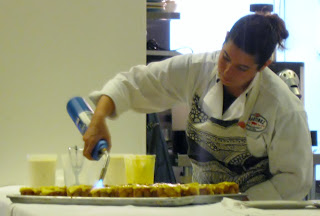 This, and the final dessert, were prepared by the pastry chef of both Sra. Marinez and Crumb, Vanessa Paz. That's not her with the blowtorch, unfortunately; that's the head chef at Sra Martinez. Check Frod's write-up once he's got it up; he usually has well-labeled pics of all notable participants. 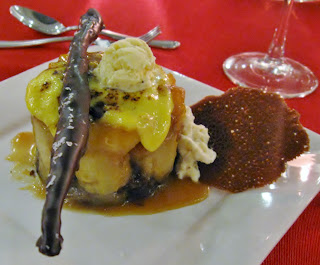 a disc of puff pastry made with caramel and chocolate, topped with roasted banana, saltay caramel espuma and a little scoop of nutmeg ice cream, served with a couple of chocolate-covered pretzels (one hidden around back) and one of whatever that thin wafer cookie is called. This, unfortunately, didn't really work for me. The pastry was soggy and tough and there was way too much banana which had a bitter edge to it. The rest of the components I quite liked, though, when taken on their own. The nutmeg ice cream was particularly pleasant. I'll have to try making some myself. The final wine pairing was Rock Wall Sauvignon Blanc 2008. It was syrupy sweet with a sour edge to it and I've got to admit I didn't really care for it either.
Despite my faded enthusiasm at the end of the evening, I went away happy. The dinner had a better hit to miss ratio than the last few Cobaya dinners I've been to and those hits were palpable hits. I haven't been to any of Chef Bernstein's places; I really ought to make the effort to seek them out.
I'll link to Frod's post when he has it up. He always has more detail than I can muster and nuanced opinions of the dishes well expressed, so do read his take as well. If anyone else who attended is reading, I'd be obliged if you could post your take in the comments.
As promised, here is Frod's write up. And here is one from Paula of the Mango and Lime and Short Order blogs. No real differences of opinion this time around; we all had a great time.
Posted by billjac at 11:38 PM

Thanks for clearing those up. I'm going to go back and correct the post so I look like less of an idiot. That'll make you look delusional, but I think you'll agree that the sacrifice is worth it. This is why I usually just stick to talking about the food. When I try to talk about people, I miss details and end up getting things wrong.

I'll give a slightly different history. It actually was nearly two years ago that we spoke about both Berenice de Araujo (CDC at Sra. M) and Chef Bernstein doing Cobaya dinners, and for a lot of good reasons, it never came together - not that she didn't want to do it, just that the timing was difficult.

I'm thrilled it finally came together.

Chowfather's right, that's Chef Berenice in the picture with the blowtorch.