This is the first time I've cooked with persimmon and I knew very little about them. I did know (from a comment on a blog post last year) that they are close cousins of black sapotes so, after I got them at the fruit stand at the UM market I knew to let them get very soft and ripe before using them. I looked around for recipes and found a lot for baked persimmon puddings most of which included more sugar than fruit. I didn't want to go quite that route, but that did tell me that cooking the fruit was a standard preparation. The last time I tried to cook down a batch of black sapote I ended up ruining a pot; this has a similar texture so I wanted to add a little insurance by using honey instead of sugar. Plus the persimmons I had were mild enough that they needed a little flavor boost.

This is what I came up with: 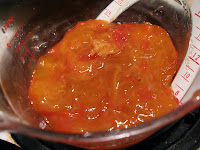 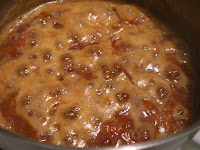 1. Put the persimmon, banana, honey, ginger and salt in a medium sauce pan. Cook over medium heat about 15 minutes, stirring regularly, until it's cooked down into a syrupy mixture. 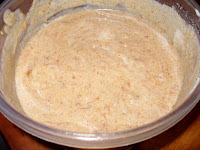 Mix in the cream and season with the other ingredients to taste. (These recipes are hard to write when I don't measure anything.) 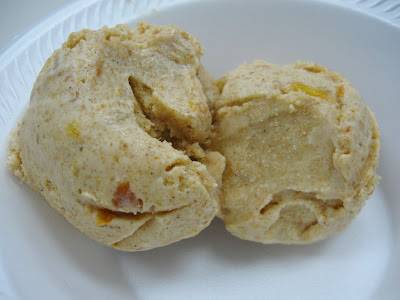 One issue with fruit ice creams is that you have to balance flavor against texture. Every ounce of cream you add thins out the fruit. Here the texture's not bad, but the fact that there's more fruit than cream is pretty obvious. It's still smooth, it just isn't creamy. There's a subtle distinction there but I think you can tell what I mean from the picture, no? Leaving the compote chunky was a good idea; the variation in flavor, texture and color that gives was pretty nice.

The flavor isn't bold, but it's clearly present and there's a lingering fruit/lavender aftertaste that's quite pleasant. It tastes surprisingly like apple pie (a la mode). That's probably due to the cinnamon and ginger flavors over cooked fruit. I sort of regret adding so much that the persimmon doesn't come through clearly as itself--its flavor is well-blended with the honey and lavender--but it did need the help. Folks who've tried it have liked it, but nobody's fighting for seconds. That's probably because of the lack of creaminess and the flavors of a fruit they've never had before. I think I'll make a version of this with black sapote (and some different other flavor components) once we start getting that in the CSA shares.
Posted by billjac at 8:11 PM

I find persimmons can be a little tricky to cook with especially if you don't get the right variety.

Letting them get really really ripe helped a lot, I think. Same as working with black sapotes, really.

wow this recipe looks amazing, and must be if the photos are any indication!